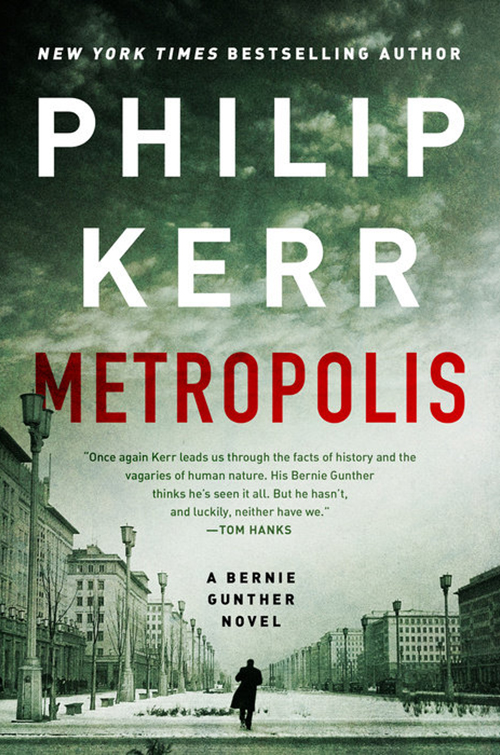 “The Bernie Gunther series is one of the great triumphs of modern noir, and it will be sorely missed.” —Booklist (starred review)

Summer, 1928. Berlin, a city where nothing is verboten.

In the night streets, political gangs wander, looking for fights. Daylight reveals a beleaguered populace barely recovering from the postwar inflation, often jobless, reeling from the reparations imposed by the victors. At central police HQ, the Murder Commission has its hands full. A killer is on the loose and though he scatters many clues, each is a dead end. It’s almost as if he is taunting the cops. Meanwhile, the press is having a field day.

This is what Bernie Gunther finds on his first day with the Murder Commisson. He’s been taken on beacuse the people at the top have noticed him–they think he has the makings of a first-rate detective. But not just yet. Right now, he has to listen and learn.

Metropolis, completed just before Philip Kerr’s untimely death, is the capstone of a fourteen-book journey through the life of Kerr’s signature character, Bernhard Genther, a sardonic and wisecracking homicide detective caught up in an increasingly Nazified Berlin police department. In many ways, it is Bernie’s origin story and, as Kerr’s last novel, it is also, alas, his end.

Metropolis is also a tour of a city in chaos: of its seedy sideshows and sex clubs, of the underground gangs that run its rackets, and its bewildered citizens–the lost, the homeless, the abandoned. It is Berlin as it edges toward the new world order that Hitler will soo usher in. And Bernie? He’s a quick study and he’s learning a lot. Including, to his chagrin, that when push comes to shove, he isn’t much better than the gangsters in doing whatever her must to get what he wants.